The first looks of the iPad are indeed a revelation and going by the vehement statement made by Steve Jobs, it could be the magical multimedia device we all have never seen. But for now, all of our ideas, feedback and the critic’s review could just be a speculation.

If you ask me, I am definitely fascinated by the mere infrastructure of the iPad and undoubtedly, is a part of the collector’s edition for the gadget freaks (like me..). But I would not want to go overboard with whatever we have seen till now. The tech specs are nothing to rave about (except the feature of eBook in collaboration with some of the giants in the publishing industry) and could generally be touted as the parent of ‘iPod Touch’ and ‘Phone’. It is sleek but not very portable (admittedly it cannot be with a multi touch interface and boasting a gorgeous 9.7” high definition display). I am hoping that it will have the ability to load large pfd files to read and browse books, which sadly doesn’t work in ‘Pod Touch’. I am also keen to find out the actual resolution for the pictures and movies (it would have been fantastic if iPad supported avi and divx files). 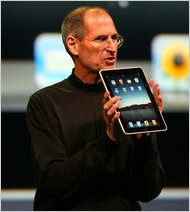 As of now, I and many others have numerous questions lingering in our minds, which I believe, would be answered when iPad finally arrives in April.

Till then, the reviews, the bashing (and the laurels) of the critics and the unprecedented expectation of possessing another world class gadget would keep me occupied.

Flamboyance meets me, and I could be contagiously luring. It kind of comes off in my writing, as my stories of passion and indulgence unfold. View more posts