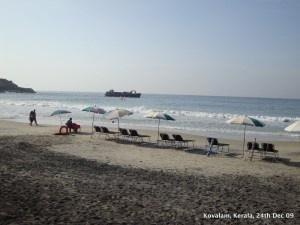 I have always heard (obviously nice things..) a lot about the state of Kerala and its picturesque locations, and post my vacation there (which ended a bit too soon!!), I would agree with most of the claims made. The place is an absolute must for folks who admire diversity. We all had a whale of a time!!
I would obviously not go gaga over the place just because I ended up on a vacation there but would echo my experiences there and how I felt about the places visited during the week long period. Moreover, my articles are known for being genuine, open and explicit (If you all have failed to acknowledge the same..!!?).
The voyage started with darshan in the sublime land of Guruvayur. And I must confess here that my parents were extremely disappointed with what they encountered. After spending around 3 patient hours in the long but passive queue, we were deprived of a decent witness to the domineering presence of Lord Krishna in this part of the world. The deity was tiny in structure and the so called volunteers behaved ruthlessly to whisk us away from the darshan site within seconds. My mother, especially, was furious but of no avail. We did compensate that with visits to other temples but I realized that my parents had a regret which would linger in their minds for some time to come. Otherwise, the small town of Guruvayur is always abuzz with commuters and visitors hogging the streets 24/7. 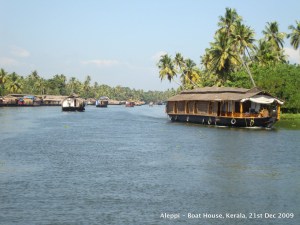 Our next destination was Allepey (Aalapuzha in local language), the most popular hide out to watch the legendary back waters of Kerala, amidst luxurious and decorated house boats. Definitely, one of the most endearing experiences of my life till date. The sprawling back waters provides a soothing touch to your journey, as the house boat slowly but steadily takes you away from the shores of the land. The 20 hour ride was worth every second!
Our next stop was Kovalam, which is around 16 kilometers from the capital city, Thiruvananthapuram (formerly known as Trivandrum). We did have a night’s halt in the city, before proceeding to the final phase of our trip. A paradise in it’s own right, Kovalam is a gorgeous piece of land and water, lying around the shores of Indian Ocean. It looks like a ‘Brazilian Endeavor’, with foreigners scattered all over the place like beehives. I could hardly spot Indians or locals there, except the hotel and restaurant owners, who carry a sober smile on their faces to keep the tourists engaged. Moreover, we were their during X’Mas time and the stage could not have been set better for the tourists to have a blast. My encounter with the waves was nothing short of a battle but nevertheless, was a memorable one.
The most disheartening aspect of the entire trip was the weather. It was difficult to believe that the state of Kerala could be so humid during the month of december. I always thought that Chennai was one of those places that did not have an authentic winter, I now have another name added to that unceremonious list.
Vacations always get over in a hurry and this one was no different. But for people who are on the verge of planning their forthcoming ventures, I would strictly recommend that a visit to ‘God’s Own Country’ is a must.

Flamboyance meets me, and I could be contagiously luring. It kind of comes off in my writing, as my stories of passion and indulgence unfold. View more posts